A lot of people have no clue what teachers go through.  The emotional toll it takes. The heaviness that weighs you down. The sacrifices that are made.  For example, I personally know two teachers, good friends of mine, who this past school year have had burdened hearts and taken in a student to foster them.

This past Teacher Appreciation Week held a defining moment for me as a teacher. You know what I’m talking about… One of those moments you’ll just never forget.

Unfortunately, it wasn’t a great moment.

I was recently being interviewed about what it’s like to be a teacher and some of the struggles we face, and I remember saying something about kid’s coming to school with so many personal issues, and things that weigh them down, and how those things can weigh us down, too.

That happened this week. In one of my classes, it was a “Free Journal Day” so they got to write about whatever they wanted. I always ask for four volunteers to share, because it can be personal. It’s a small class.  A young man volunteered to read his.  A kid who’s been in trouble a lot of times.  A young man who no doubt will probably be voted Class Clown for the entire 7th grade.

As he held his head down to read aloud from his notebook, something was different about his countenance. I noticed it when he came into class earlier. But it sprung forth as he read the following from his journal: 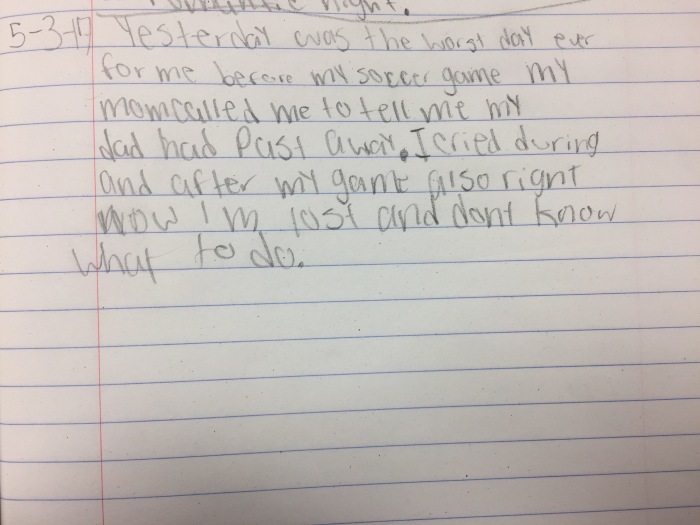 The other students, and myself included, became silent when he was done, as he was clearly teary-eyed.  He finally lifted his head and looked right at me where I was able to say, “We’re here for you.”  And another student echoed it saying, “Yeah, (student name), we’re here for you!” As class went on, I ended up writing him a little note saying if he needed anything to let me know.

So that was on Wednesday.

Now, I have the pleasure of teaching this particular student for not only one class a day, but two. So, we see each other for 2 hours and 24 minutes every single day. Multiply that by about 175 days of school. That comes to 25, 200 minutes, or 420 hours.   I’m thankful in that amount of time he was so brave to share something like that with myself and 8 other middle schoolers.

Fast forward to Friday. I had him for his first class in the morning.  He seemed okay.  Then later again in that small class. Right at the beginning he came up to me, and I could tell he was upset. He asked if he could talk to me in the hallway, so I got things started with the other students and then we stepped outside.

He started crying and telling me about how another student at lunch said she had lost her dad and he had given her a letter about how much she meant to him, and he told me that upset him because he’s never known that from his own father.  He broke down and obviously wasn’t going to be able to focus. I gave him some options, and in the end he decided to take a piece of paper out in to the hallway and write a letter to his dad of all the things he would want to say to him.

As he was doing that, it broke my heart. Because I too, know what it’s like to lose a dad… and a step-dad.

While he was writing his little heart out I decided that I would write him a letter. His dad never told him how he felt but I figured  maybe I could. He clearly needed some encouragement. I put it in an envelope and gave it to him when the bell rang.

I don’t know what his reaction was when he read it. And that’s okay. Like I said earlier, it was a defining moment as a teacher, one that comes with a heavy heart. It hurts seeing my students hurt. But it was a reminder to me of a verse that keeps me going everyday, even when it gets hard:

“And let us not be weary in well doing: for in due season we shall reap, if we faint not.” -‭‭Galatians‬ ‭6:9‬ ‭KJV‬

God is in her, she will not fail.